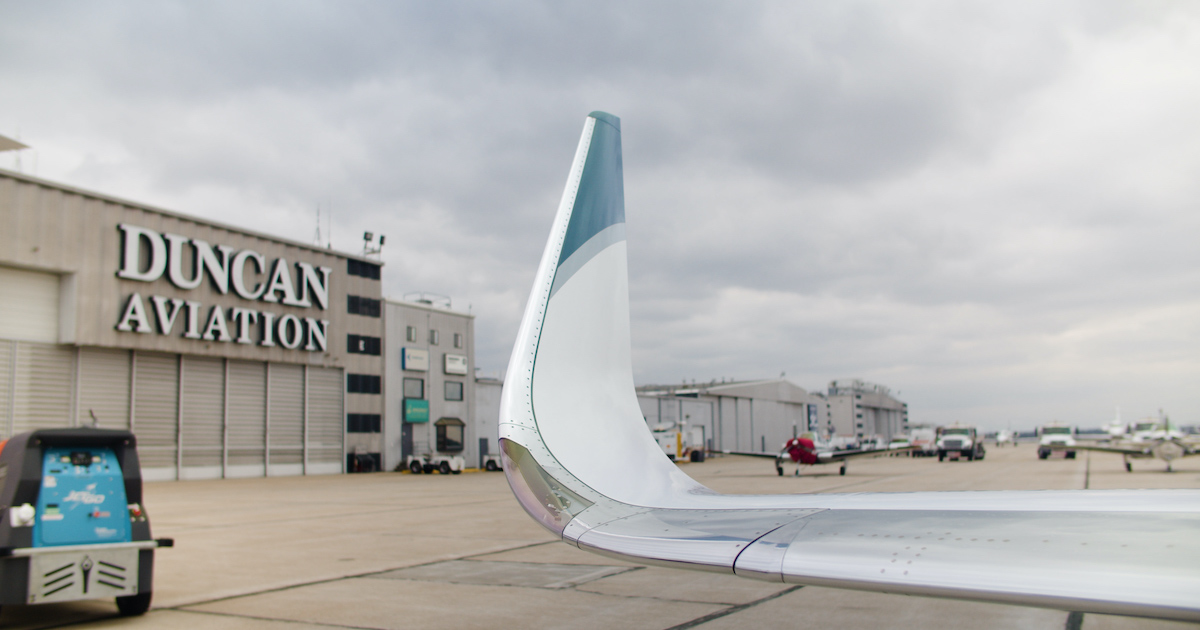 LINCOLN, NEB — Duncan Aviation is pleased to announce the delivery of the 100th pair of Aviation Partners, Inc. (API) blended winglets that the company has installed on a Dassault Falcon aircraft. A Falcon 900EX flew away from the company’s Lincoln, Neb., MRO facility, with the honors late last week.

In 2008, Duncan Aviation partnered with API and the OEM to install the API blended winglets on a Falcon 2000EX for Supplemental Type Certificate (STC) certification flight test. API subsequently announced Duncan Aviation’s Battle Creek, Mich., and Lincoln MROs as the first authorized installers for Falcon blended winglets in 2009. Between the two locations, there are nine airframe maintenance teams with more than 10 years of experience completing this in-demand modification on all series of the Falcon 50, 900, and 2000 aircraft.

“It was a 100% partnership,” said Dale Hawkins, Duncan Aviation’s Falcon Airframe Service Sales Representative located in BTL. “Duncan Aviation and Aviation Partners have a great working relationship. We appreciate their continued support and confidence in the quality of our installations. It is confidence shared by our mutual customers.”

“In the mid-1990s, we completed several Gulfstream II winglet installations at Duncan Aviation, followed by dozens of Hawker 800 series aircraft. With 100 Falcon winglets now complete, Duncan Aviation is both our longest-standing and by far our most prolific, authorized installation partner,” said Gary Dunn, API President.  “Congratulations to the entire Duncan Aviation team on this milestone achievement; we look forward to installing many more winglets together in the future.”

On March 30th, Two Bear Management’s Falcon 900EX took off from Duncan Aviation sporting this highly visible technology. Improved fuel efficiency and smoother ride are only a couple of the many reasons they chose winglets.

The Falcon 900EX was in for the 2C inspection, installation of the Gogo AVANCE L5 connectivity system, new cabin and cockpit USB ports, complete exterior paint, partial interior refurbishment, and landing gear overhaul. The extensive project made it an excellent time to include winglet installation.

“It’s one-stop shopping with a competitive quote at Duncan Aviation,” stated Nugent. “We get everything done with one visit. And because this is the 100th pair of winglets they have installed, we know the job was done right.”

Having visited other service centers as a customer, Nugent added that Duncan Aviation does things better. “Their quality and value are very competitive,” he added.

The 101st Duncan Aviation Falcon winglet installation comes in May 2021.

In addition to the Falcon 50, 900, and 2000 aircraft families, Duncan Aviation is also an API authorized installation partner for winglet modifications on Hawker 800 series aircraft.

ABOUT DUNCAN AVIATION
Duncan Aviation is an aircraft service provider supporting the aviation needs of government and business operators and other service providers. Services include major and minor airframe inspections, engine maintenance, major retrofits for cabin and cockpit systems, full paint and interior services, and preowned aircraft sales and acquisitions. Duncan Aviation also has international aircraft components solutions experts available 24/7/365 at +1 402.475.4125 who can handle any aircraft system problem with immediate exchanges, rotables, loaners or avionics/instrument/accessory repairs and overhauls. Complete service facilities are located in Battle Creek, Michigan; Lincoln, Nebraska; and Provo, Utah. We also have dozens of other facilities strategically located throughout the United States to provide customers with regional support and the quickest response possible to avionics, engine and airframe Aircraft On Ground (AOG) situations.